Sevenoaks is only a twenty minute train ride away from my house, and having never been there I thought I'd pay a visit. One of the great things about living in South East London is how the scenery can change from built up areas to rolling green fields in a matter of minutes, and this train journey was no exception as the dreary suburbia of Orpington gave way to the charming natural scenery of Chelsfield and beyond.

The first pub I visited was in Chelsfield Village, nestled in-between Sevenoaks and Orpington. The surprisingly long walk from Chelsfield station to the village was mainly comprised of lovely green fields high above Orpington and a panoramic if hazy view of London beyond. Approaching the village I was greeted by some huge houses, a clear indication that this is stockbroker territory, using the trains to speed into Cannon Street station in the mornings. To be honest I felt a little out of place and was worried a policeman might appear and ask me politely to leave, nodding down the road saying "Orpington is down that way, it's more for your type." 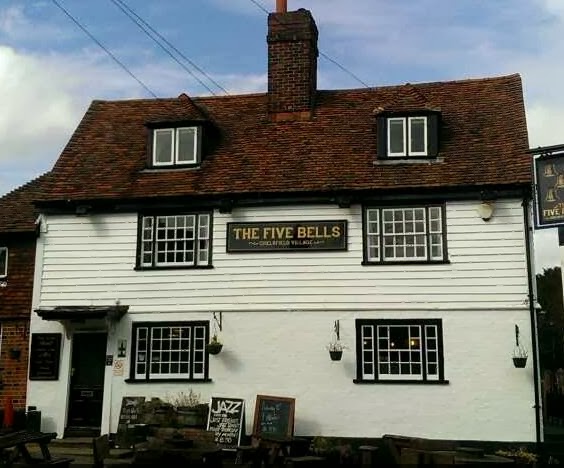 Nestled among the mansions and across the road from the village school is The Five Bells, a traditional weather board pub. Sadly the beer selection wasn't as charming as the rustic interior. Unusually Doom Bar was on offer gravity dropped from a cask sitting on a bar, but it was not enough to entice me to have a pint of that most boring of beers. There was also Courage Best and a Everards beer on offer. I settled for a pint of Otter Bitter, and although it got the job done it was nothing exciting. This place seemed highly involved in the community with plenty of events on. As it was 11:45am on a Thursday morning I was the only customer in but the staff were friendly and there was a dog pottering around for company. I look forward to returning.

I walked from Chelsfield to Knockholt station to catch a train into Sevenoaks. Even though Knockholt is supposedly still "London," the rolling green fields and farmland are about as far removed from the Big Smoke as you can get. Walking towards the station I was joined by a grumpy old pig walking alongside with me, and it was at this point I refused to believe I was still in Travelcard Zone 6. The ticket office at Knockholt was closed so I had to purchase a "Permit to Travel," a rarely used (in London) "honour" scheme for buying tickets which made everything feel even more old fashioned and less London. When it was time for my train I half expected a steam train to roll into the platform.

In Sevenoaks I met up with a friend of mine and we enjoyed a good lunch at The Black Boy, a Shepherd Neame nestled in the quaint town centre. The food was excellent but the beer selection left a little to be desired. Only Kent's Best, Spitfire and Whitstable Bay were on offer, and my pint of Best wasn't in the greatest condition. Round the corner is The Anchor, a real old fashioned boozer. Walking in after the lunchtime rush only a handful of regulars were in, and they were all crowded around the bar chatting with the lively landlord, Barry. I ordered a pint and took a seat, enjoying the banter. It's a good job there was lively conversation going on as the decor is pretty basic here and doesn't create much of an atmosphere. I completely forgot the name of the beer I was having but it was a pretty good bitter from a small local brewery. The only other options were Doom Bar and Harveys Best. Sevenoaks doesn't seem to be home to adventurous drinkers.

I took a half hour walk from the town centre down to the outskirts of town and The White Hart. This is a Brunning and Price pub, and I had high hopes as I was very impressed with their outlet in Chester, Old Hawkers Arms. Sadly I wasn't as impressed with the Hart. First impressions were good as there were plenty of hand-pulls but on closer inspection most of the beers that were on were of the boring brown bitter variety. The beer I did try, Growler Bitter from the Growler Brewery, wasn't in best condition and there was sediment at the end of the pint. I heard the barman complaining to another customer that they have been short staffed recently so maybe this was affecting the quality of the beer. The pub otherwise was tastefully decorated, quiet and to be honest a little boring, which probably explained why the other groups there were mainly comprised of older ladies.

The last pub on the list was The Chequers. Traditionally furnished, it was building up a steady stream of punters at 4pm on a Thursday afternoon, and they all seemed pretty pleased to be there. The beer selection was the most exciting of the pubs I'd visited, with plenty of local ales on offer. I tried Rustic from the Tonbridge brewery, a dark and comforting bitter with a well balanced flavour. Westerham Azzuri Double was a brave attempt at an Italian style beer. It tasted like a hoppy bitter but with malty undertones, it worked surprisingly well and was a very pleasant sup indeed. With the genial customers, friendly service and decent beers The Chequers was my favourite of the pubs I'd visited.

Next week it's a rundown of the pubs of Rochester. See you on Sunday!
Posted by David - A Bitter Bloke at 21:30