Having visited Whitstable, Herne, Sevenoaks and Rochester, I was starting to struggle about where to visit next in Kent. Faversham, Gravesend and Margate just weren't that appealing to me in this chilly weather, and more importantly they didn't have many pubs listed in the Good Beer Guide. Just as all seemed lost and I was resigning myself to visiting Dartford The Lovely Jemma suggested I go to Maidstone as it's "quite nice." A quick look at the guide showed there were at least four pubs there worth visiting, so off to Maidstone it was!

My impression of Maidstone is that it is a rather generic market town, not as big or pleasant as Rochester but a step up in size from Sevenoaks. Like the other Medway shopping towns I'd visited Maidstone mainly consisted of one long street packed full of shops going through the centre of town. From what I saw there didn't appear to be much else to do in town apart from shop or go to the pub, so I imagine being a teenager here must be pretty boring as most don't have a huge amount of money to spend on shopping and they can't have a drink in the pub (legally.) I guess there's always huffing glue or bothering old ladies to keep them amused.

Luckily for those over 18 or with a decent fake ID and a old face the pubs are pretty good. The first pub I visited was The Swan, a Shepherd Neame hostelry near the train station. Walking in on a Tuesday lunchtime there was only one other customer in. I spotted an India Pale Ale from Neame on the bar and as I'd never tried it before I thought I'd give it a go. I was served by a young lad who didn't look old enough to drink the ales he was serving, but he poured a pretty good half. Shepherd Neame beers rarely rise above "average" in my book but the Pale Ale was actually "pretty good." Light and hoppy this went down a treat while I sat outside in the sunny but blustery weather. A good start to the day. 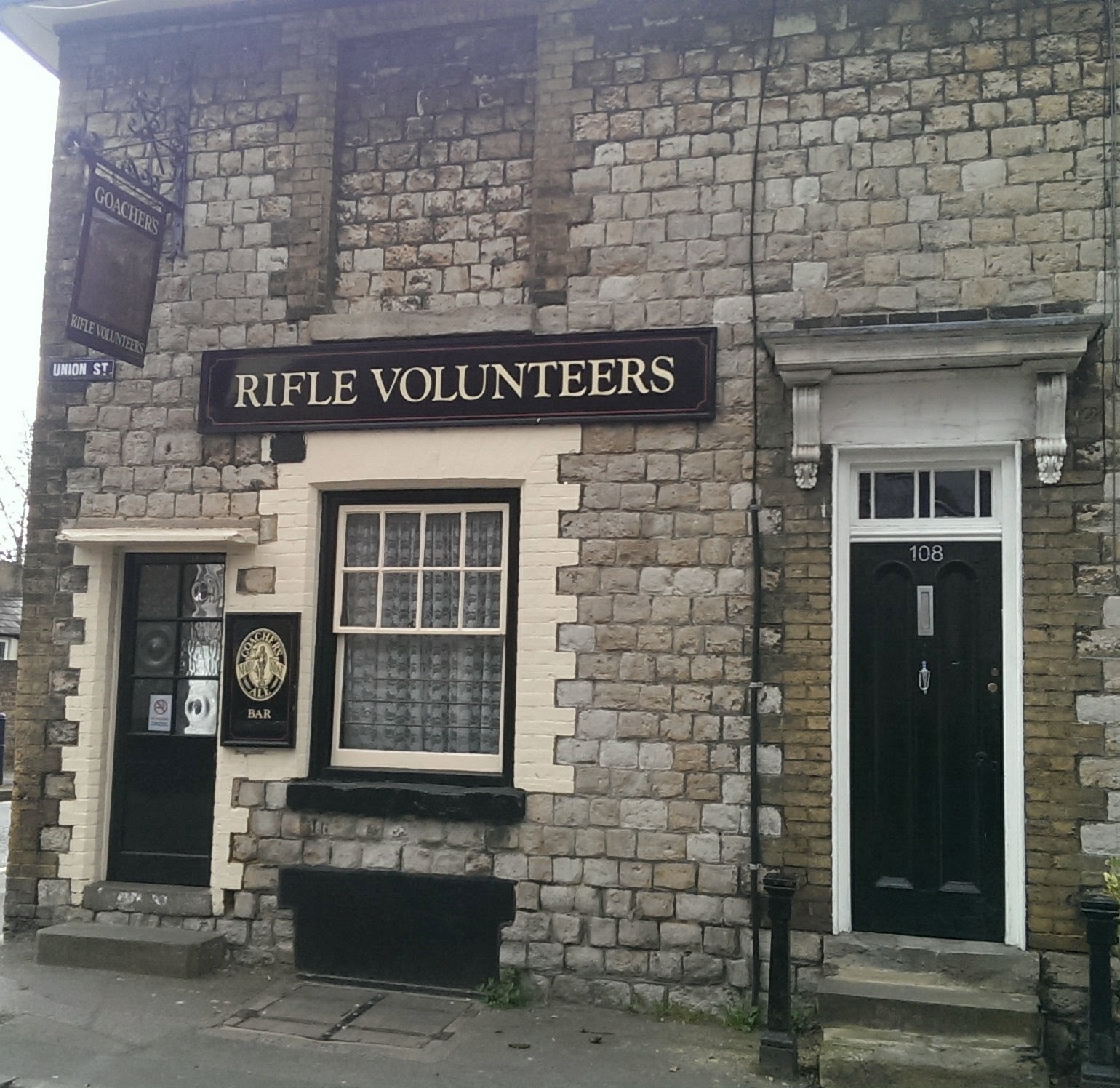 Next up was the Rifle Volunteers. Judging from the reviews on the internet this appeared to be a "love it or hate it" kinda place. Walking in I thought I'd walked through a time portal to the 70's. This small pub was the most old school venue I'd been to in a while. I doubt the decor and furniture had changed since the pub first opened, but it had a quaint charm. I was the only customer in and I struck up a friendly conversation with the landlord, Alan, who filled me in on the history of the place. It was originally a Neame pub until the brewery sold it over his head in the mid nineties. Just as it looked like the place would turn into houses and Alan would be out of the job, the Goachers brewery came along and bought the place. Alan certainly sounded grateful for the opportunity Goachers had provided him.

Three Goachers ales were on offer, and I started with the Fine Light Ale, which lived up to its name. A splendid, easy drinking tipple. I noticed Alan had the Extra Mild on, and I mentioned I had a below par half of this at the Man of Kent in Rochester. "Try mine" he said, and I took him up on the offer. Well it was like drinking a completely different ale to the average sup I'd had at the Man of Kent. The coffee and chocolate notes were coming through splendidly, it's amazing how much of a difference good conditioning and care can make to the taste of a beer. Sadly I didn't get the chance to try the Extra Stout, but I promised Alan that when I'm next back in Maidstone I'll pop in and give it a go. He only serves the same three ales plus one lager, and a couple of cans of cider are on standby in case a non real-ale drinker wanders in by mistake. I'm pretty sure the Stout will be on next time I visit.

My next pub was at the other end of town. The Pilot, a Harveys pub, had a blackboard outside claiming this was a "country pub in town." The traditional exterior and rustic interior went a little way to matching that claim, but the pub being right on a very busy main road destroyed the illusion. A decent selection of Harveys beers were on offer. The Mild was disappointing with not much flavour coming through, but maybe I'd been spoiled by the Goachers. The Old Ale was much better and its malty flavours went down a treat. Finally the Porter was an interesting tipple - very fruity and even a bit sickly at first but once it had settled down it was quite a pleasant pint.

A fifteen minute walk back to the other end of town brought me to The Flower Pot. Voted Pub of the Year and well regarded by CAMRA and seemingly every beer lover on the internet who has visited, I was looking forward to this place. It didn't disappoint. The last three pubs being tied houses meant I was limited in beer selection, even though all the drinks had been great. Walking into the Flower Pot I was delighted to see a Marble Pint was on offer and I immediately had a half. It was spot on, this gloriously hoppy, easy drinking session beer being in fine form. A Sausage and Chips and a pint of Oakham Jesters Ferret with its citrus notes ended the day on a good note. With the friendly, knowledgeable staff and cosy atmosphere alongside the decent beers I could see why this place has won many awards.

Overall I had a good time exploring Maidstone's fine pubs. It was nice to visit such a varied selection of boozers with different beers on offer. The only sad thing was how quiet all these pubs were on a Tuesday afternoon. The Swan, Rifle Volunteers and Pilot weren't serving food, so I could see why maybe these pubs weren't busy during the day. As Alan said to me in the Volunteers, people just don't go out for only a drink at lunchtime these days, and haven't for a long time now. Not even tradesmen or labourers go out for a lunchtime tipple much these days. But even the one pub that did serve food, The Flower Pot, only had two other customers in at 2pm when I popped in.

The restaurants and cafes in town were busy so people do want to go out for a lunchtime meal, but it seems nobody wants to visit the pub at lunch for just a drink these days. I hope the evening trade keeps the excellent traditional boozers such as the Rifle Volunteers going but I do worry they may not be around forever if they don't find a way to adapt to the fact that people are drinking less in pubs. I wouldn't want these places to start serving food as I think it would destroy some of the character - but I'm not sure what the alternatives are.
Posted by David - A Bitter Bloke at 18:49