My main reason for going to Birmingham was to visit a friend who lives in Moseley to celebrate her birthday. Moseley is a suburb on a hill looking over Birmingham city centre. This way my first visit there and I wasn't sure what to expect. It's actually quite a well off little suburb, apparently popular with factory bosses back in the day because they could look down at their industrial paradise high up from their grand houses. These days it's more doctors and solicitors looking down at the city while counting their riches, and The Guardian did an article on the area claiming that the Russians might move in once High Speed 2 is up and running. Somehow I don't think the Oligarchs are going to schlep it out to Birmingham but stranger things have happened.

The party was excellent although I'm starting to feel my age as I was nodding off by 3a.m. I don't think the ales I had consumed before hand helped matters. The next morning I felt surprisingly chipper and me and The Lovely Jemma headed off into Moseley centre for that finest tradition of hangover cures - the Wetherspoons Breakfast. The Elizabeth of York is a modern two floor 'Spoons inside, with the downstairs a little dark and claustrophobic because of the  overhanging second floor. The breakfast was fine and although I didn't get to try the beer, the typical early morning elderly clientèle all seemed to be enjoying their morning pints of Fosters and Stella. I didn't see anybody supping a whisky chaser with their pint though - they're not as hardcore here as the Manchester Wetherspoons breakfast customers.

Suitably refuelled from breakfast we had a look down the high street. We counted five pubs in the area - clearly the citizens of Moseley enjoy a drink. We popped in to the Prince of Wales at the end of the high street as we had heard good things about the place. At 12p.m we were the only customers in there so we got to enjoy the well kept and impressive interior in peace. This is a fine looking pub with two very comfortable snugs, one with a small serving area. Follow the fine tiled corridor to the outside area and you'll find a hut selling cigars, and also one of these: 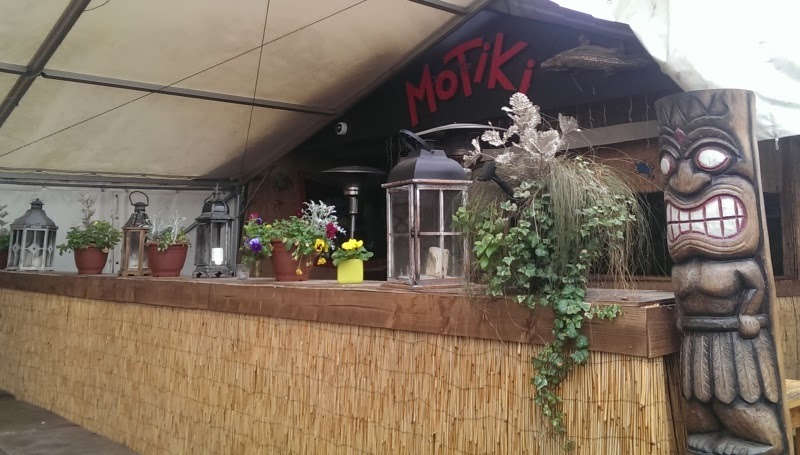 Yes there's a tiki bar in the garden. It was amazing - a huge space with all the tacky tiki crap you'd expect - masks, washed up boats, and cocktails with terrible tiki theme puns in their name served from a beach hut. Me and TLJ made a vow to come back one evening in summer to try this place - I imagine it's a blast. Back inside I enjoyed a Oakham Bishops Farewall in one of the snugs. It was a relaxing, quiet pint until the fireplace started belching out smoke and the fire alarm went off. The staff sorted it out pretty quickly and we left shortly thereafter. You know a pub is good when I'm nearly asphyxiated there and I still look forward to coming back.

Returning to Birmingham city centre we went to The Old Contemptibles for a relaxing lunch before heading back to London. This Nicholson's pub follows the standard formula - dark oak furnishing, comfortable pub classics on the food menu, varied if boring selection of well kept ales. I tried a Vale Longitude, which was in good condition with a delicate fruity flavour. My fish and chips dinner was filling if uninspiring. In fact uninspiring describes this place pretty well. It did the job but I wouldn't be rushing back. Well fed and watered we headed back to London. I enjoyed my time in Birmingham and I didn't spot one "craft" pub while on my travels - the pubs we visited just seemed to concentrate on being welcoming and serving a good selection of beers rather than trying to impress with fifty different types of IPA.

Just a quick mention of the Cronx Brewery open day last weekend. What a pleasure this was, and it actually gave the rather grim Croydon estate of New Addington a reason to exist. This young start up brewery organised an entertaining open day with good beer and great BBQ food. While munching on a delicious pulled pork sandwich I enjoyed a Cronx Single Hop Cascade which was a well hopped and very yummy tipple. Fellow Croydon brewery Clarence & Fredericks had a guest beer on and their Cascadian Black was superb, well hopped and a hint of sourness in the finish giving it an edge. The only disappointment was the Entire Chilli Porter which apart from the chilli tingle at the end didn't taste of much at all. Sadly I didn't get to see any of the live bands but overall it was a great day and with the warehouse setting, trendy BBQ, live music and craft beer I felt I was more in Hackney rather than the cultural void that is New Addington. Good to see Cronx can organise a piss up in their own brewery.