Preston is never going to win a "prettiest town centre" award, or even a "town centre which is slightly pleasing to the eye" award. It's looking a bit shabby and run down, with a depressing amount of closed down stores, including the aptly named "Bankrupt Books." The town centre has a brown and grubby feel to it, even on the sunny day I was there. But take a short stroll away from the high street and you will stumble across the fabulous Avenham Park. I don't often gush but this park is absolutely gorgeous, with the River Ribble flowing majestically through the middle accompanied by pretty tree lined banks. Well kept and beautifully presented gardens await as you stroll along the river. My awkward pictures below don't really bring across the beauty and majesty of this park. The amazing scenery would be pleasurable enough, but even better there is an excellent pub to be found in the park. 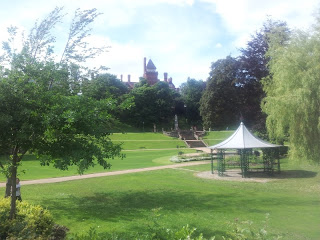 The Continental is perched alongside the bank of the river and boasts a pleasant, modern beer garden overlooking the river and railway bridge. As trains trundled by I enjoyed a half of the house beer, Continental by Marble Brewery. I've never had a bad brew from Marble and this beer was no exception, a hoppy floral treat that matched the high standards of the park and pub. Sadly I didn't have much time to stay at The Continental as there were other pubs on the list before catching the tilty Virgin train back to London. But if time wasn't a constraint I could have spent a good few hours in this charming, comfortable pub. It was my favourite of the pubs I visited in Preston and I look forward to going back. 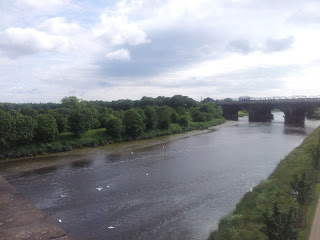 The Market Tavern was a bit of a jolt back to reality, an old school boozer nestled near, funnily enough, a bustling market. Comfortable booths line one side of the pub and a small serving area dispenses a tantalising selection of hand pumped ales and a good selection of bottled beer, with boozed up regulars propped up against the bar chatting about everything and nothing. I sampled a Bohemian, which appears to be Greene Kings attempt at a "craft" ale. It wasn't a bad effort, with a good hoppy flavour, but it wasn't anything spectacular. To be honest I still don't really know the difference between a craft ale and a real ale. Surely they're both "crafted" unless real ale is actually picked fully formed from trees or dug up from the ground? It seems the main thing that differentiates craft from real ale is about £2-£3 for the price of a pint and about 3-5% more ABV, plus about ten times more hops.

The last pub on my jaunt around Preston was the Old Vic. Handily situated across the road from Preston railway station, this pub looks a bit nondescript and run down from the outside, but venture inside and it's also a bit nondescript and run down . This is a big pub with a large central bar, and what appeared to be a faux wooden beams on the ceiling. It was quiet but comfortable enough when we visited. The first beer sampled was Doff Crocker from Three B's, which was a bit of a disappointment. It had a slightly watery flavour although a decent dry finish salvaged things a little bit. The Priory Gold from Burscough was better - a pleasant and refreshing hoppy ale with good floral flavours. 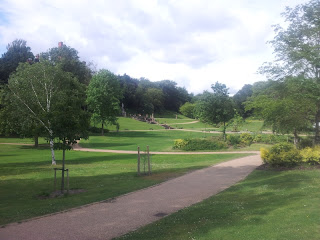 The Priory Gold was to be my last tipple at Preston before sauntering across the road and heading back to London Euston on a Virgin Pendolino. I've been travelling on these trains for a good few years now and they've finally fully fixed the issue with stinky carriages. This was due to a fault with the toilets which meant the ventilation system basically pumped everybody's bodily emissions back into the carriage. Not pleasant, especially when riding with a coach load of boozed up, kebab filled passengers, with the tilting of the carriages adding to the nausea factor.

Next up is a trip around the pleasant pubs of Bath. Hope you can join me. Cheers!
Posted by David - A Bitter Bloke at 16:55