Ah the north of England. Despite being a soft southern lad I'm a seasoned visitor to the north, having spent many a summer holiday visiting my grandparents in Blackpool. At first I was scared of Northerners and their bizarre ways, such as wishing a good morning to strangers, wearing next to nothing when it hits 12 degrees, and serving massive portions of food but now I'm used to it and don't break down crying when an old man tries to have a conversation with me on the bus.

I recently went up to Blackpool with my family to celebrate my nan's 90th birthday, and we stayed in Preston. I'd only visited Preston a couple of times before and all I could remember was a bus station with fins and how windy the whole town was. Now that I had a couple of evenings to kill I thought I may as well have a good look around the place and also visit a few boozers. 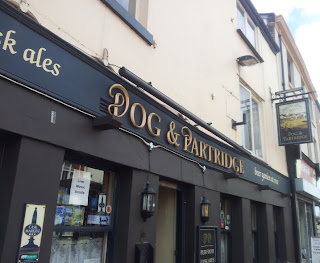 First up was the Dog & Partridge. I actually visited this pub twice over the weekend. The first time was with my parents in tow. As we walked in a DJ was cranking out the Pixies at room shaking levels. As much as I enjoy listening to "Debaser" at ear splitting volume I thought perhaps this wasn't the place for my parents and we decamped to the Wetherspoons across the road (more on that later.) The second visit, with just my brother and The Lovely Jemma in tow, was a bit better. The pub is quite a shabby place split into two rooms. The front room was basically a God's waiting room with crusty Prestonians enjoying a quiet pint, while the back room had a younger clientèle attempting to dance along to dodgy rock music. Certainly an odd mix of but it was actually rather nice. Sadly the pint of Tetleys Mild that I sampled wasn't the best, suffering from the same watery flavour that all InBev ales seem to have these days.

Next on the list is the Black Horse Hotel, which I visited with my family. I must admit I was aprehensive of going into this pub, as it wasn't in the Good Beer Guide and there were leary lads standing outside. But then I remembered that everybody in Preston looks a bit leary so it was probably nothing to worry about. A Robinsons pub, this had a good selection of their ales on hand-pump including Old Tom, a knockout at 8.5%ABV. Apparently they'll only serve this in halves, presumably to avoid killing all of their potential repeat customers. I wasn't brave enough to try the Old Tom in front of my folks. Nobody wants to see their son as he slurs and stumbles down the windswept streets of Preston before collapsing into a bin. I instead opted for a pint of the reliable Unicorn, and as ever it was a solid best bitter with a good crisp finish. This small, charming pub was packed to the rafters and although enjoyable we moved on to somewhere where we might get a seat.

That place ended up being the local Wetherspoons. The Greyfrair is a barn of a pub and there was no trouble finding a place to sit, even on a lively Saturday night. I had to step in and order a pint of Burning Bails before my dad ordered a "Burning Balls." This was a perfectly average beer from the Acorn brewery, nothing special but it got the job done. Like the beer the pub itself was perfectly average and stereo-typically 'Spoons. The décor was bland with that maroon carpet that Wetherspoons owner Tim Martin must be getting a good deal on, the tables and chairs wooden and slightly shabby, the bar staff a little dozy and the customers looked like they'd come straight out of the "Big Book of Pub Caricatures." If you've been to a 'Spoons before you'd know what to expect and as a frequent visitor I felt pretty comfortable.

The Old Black Bull has won many awards and seemed to be the most respected pub by CAMRA of the ones we visited. This was a good old fashioned boozer with a large main room and a fairly long bar with a tempting selection of ales on offer. Again this is a place we had to visit twice. The first time there was live music on, and although the band sounded excellent the place was absolutely rammed with no standing space and no hope of getting to the bar. The second time was quieter apart a large rowdy group standing at the bar. I tried the Gold by Tatton Brewery which was probably the best pint of the weekend. Subtle fruity hops led to a superb dry finish, and overall a very enjoyable pint. Good stuff.

Part 2 will cover The Continental, The Market Porter and The Old Vic. Why not stop by and see which one was my overall favourite? Unless you've got something better to do in which case do that first then stop back here when you're done. Cheers!
Posted by David - A Bitter Bloke at 18:59