The Pembury Tavern and Holborn Whippet

It was risky business a couple of weeks ago as I took a trip to Hackney for a few pints at The Pembury Tavern. To be honest I have taken many risks in my life, which is why I've been banned from many good board game stockists. The Pembury Tavern is a large, open bar with bare white walls and plenty of handpumps. With the large plain room and big wooden tables scattered around the place felt like a school dining hall but the ale was plentiful and in good nick. The crowd was suitably varied for Hackney, with a mixture of old and young folks and, always a danger in Hackney, the occasional hipster. I visited during their beer festival which supposedly had a London theme. I immediately got in the spirit of things by ordering a Cornish ale, the ever realiable Betty Stoggs from the Skinners brewery. This was in good nick and the warm, hoppy and bitter taste came through wonderfully. I did try a couple of ales from local breweries which were sadly umemorable. I can't even tell you the name of the brewer or the ale! What a sorry excuse for a blog writer I am. Although not tied with the Milton brewery pub they appear to be the regular beer, so I opted for a pint of Milton Cyclops, a rather pleasant fruity ale which goes down well.

I did enjoy my time at the Pembury but I wouldn't be rushing back. Well actually if I was to return I would be rushing so I can avoid getting shot at and/or stabbed in Hackney. But it was a pleasent evening and I managed to beat three people in a row on the pool table so I can't really complain. I wasn't actually smacking their faces into a pool table- Hackney hadn't affected me that much.

The Holborn Whippet is a new venture from the guys who run the excellent Euston Tap and apparently is not named after the Devo song. This is a small pub with cosy indoor seating and a small outside seating area. I had high hopes for the Whippet as the Euston Tap is one of my favourite pubs for craft ale, with a jolly atmosphere and keen staff. Would the Whippet replicate its success?

I must admit the first time I went to the Whippet I didn't even stay for a pint as it was absolutely packed, and the high ceiling and bare walls meant the noise level was terrifically high. However returning early evening on a Saturday the place was pretty quiet. There are around 15 keg and 6 cask ales availabe. Like the Tap these are served from a wall which presumably bleeds ale. 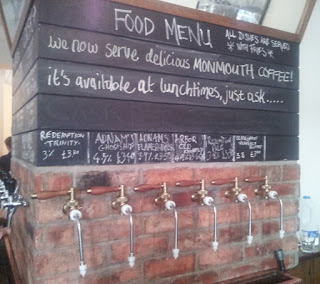 The lone barmaid was serving drinks pretty quickly and I enjoyed a half of Arbor Old Knobbley. This unusual ale, marketed as an old ale, tasted like a mild but was bordering into stout territory. It was pleasant with an interesting chocolate and malt taste, but to be honest a half was enough for me. I also sampled the Adnams Flamerunner, a solid pale ale with a good citrus taste. It wasn't anything spectacular but it was a good pint for a rather stuffy day. I also ordered a burger and chips from their small menu. Everything was great except the burger meat itself which was gray and tasteless, which is a bit of a setback in a burger. A shame.

Although the Whippet had a lot going for it, in particular the enthusiastic and knowledgeable staff, I just never got comfortable in the place. The atmosphere was a little sterile, even as it started to fill up as the evening went on, and the plain decoration and white walls actually got a little depressing after a while. After a couple of hours I was itching to leave and we eventually decamped to the Cross Keys in Covent Garden just so I could see some good old fashioned tat hanging from the walls of a pub. There's potential at the Whippet and I no doubt will return once things have settled in a bit. I'm sure they can't wait for my return!
Posted by David - A Bitter Bloke at 20:38