Two Doves and The Wenlock Arms

I was saving this update for when summer would actually show itself in all it's hot, sunny, blue sky glory, as it centres around a lovely beer garden I visited for the first time recently. But as I'm still wearing a jacket in July and a nice day doesn't seem to be on the horizon, I'll just post this now. It's a shame the weather has been a wash out as there's nothing more pleasurable than a pint in a British beer garden, unless you're there with a cider drinker. Then you have to deal with every wasp in the land trying to take a sip of the apple goodness and you end up spending the entire afternoon waving your hand about like you've got an uncontrollable spasm, or just spinning around frantically yelling "Is it on me?! Is it on me?!" contorting your head around like Linda Blair in the Excorcist trying to see if a wasp is crawling down your back.

The Lovely Jemma likes to point out that as wasps eat fermented apples, they're basically pissed all the time anyway. But they're not happy drunks like your Uncle Wally who rambles on about how things were better back then before slowly falling asleep in the corner gently farting, but more like your mad Aunt Sally who starts hitting her husband and calling all the neighbours bastards once she's had a sherry. Basically wasps are terrible creatures and I look forward to the day when some unknown disease wipes the whole lot out.

A glorious beer garden I've come across recently is at the Two Doves, a rather unassuming local near Bromley Common. I did feel a little uncomfortable walking into this Young's boozer as it's truly a locals place, but they're all friendly and happy to leave you alone if you're an antisocial shut in like myself. The beer selection is nothing exciting, but the Young's ales are kept in good condition and I had a particularly good pint of the Young's Special here. The food menu is perfectonary with a simple selection of sandwiches, the kind of food you'd expect to find covered in shrinkwrap sitting on the table when it's lunchtime in the bowls club clubouse. But head outside the back and you're greeted with this lovely sight: 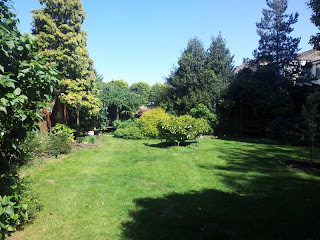 This truly is one of the nicest beer gardens I've had the pleasure of drinking a pint in. It's just like sitting in a lovely Auntie's immaculately presented garden, complete with a shed full of tat and aging patio furniture shoved in at the back. It's fabulous and well worth visiting if it's a sunny day and you're in the area.

Another pub I visited for the first time is the Wenlock Arms near Old Street. Recently taken over by the owners of the hit and miss Queen's Head in Kings Cross, this pub is a pretty good stab at being a local's local. The ale selection is great and I had an excellent couple of pints of Mighty Oak's Oscar Wilde, a great ale which I have waxed lyrical about previously. A seven piece band consisting entirely of friendly grandads played some excellent blues, conversation was had, a pub dog said hello (being Hoxton it was a poodle) and a fun time was had by all. A nice pub if you're in the area, because if you are in the area you're going to need a respite for the unremitting blandness of this forgettable part of London.
Posted by David - A Bitter Bloke at 21:34