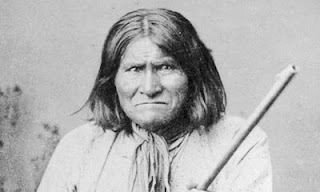 Geronimo are a chain of gastropubs found mainly in London and recently bought out by the Young's chain. Sadly despite the name they're not a chain of Doctor Who themed pubs. I'll have to stick to the Fab Cafe in Manchester if I want a drink while sitting next to a Cyberman and Tardis. Looking at their website you would be forgiven for thinking that the type of customer they are trying to attract - judging by the pictures - are young, moneyed, middle class, white, wankers. Perfect for me then. The reality is that having been to three Gernoimo pubs it's not easy to pigeon hole them. Each offers a very different experience.

The Betjeman Arms in St Pancras is probably the best one I've been to and as it's near where I work it's a dependable option for an office lunch. The menu doesn't change much but the food is always well prepared and tasty. The ale is usually in good condition even if they don't have a very exciting selection. The unique Betjeman Ale from Sharps is a tasty if unremarkable bitter but is worth a pint or two. Unexciting but decent sums up the Betjeman. Pleasant food, drink, decor and atmosphere but not the sort of place you'd go for a session. But it is a nice place to stop for a drink or bite to eat while waiting for a train, so I guess it's serving its purpose. The Betjeman used to do pretty good mini ale festivals but unfortunately that seems to have stopped. Hopefully they'll bring them back.

The Bull is Geronimos outpost at Westfield Shepherds Bush. When I visited on a weekday evening the pub was loud, busy, and packed full of kids. A tremendous amount of kids. Hardly anybody in there was over the age of 21 or capable of growing a decent beard. I'm not sure if this was a freak occurrence or a regular thing. The Bull didn't seem like the kind of place to attract a very young crowd, the decor giving the impression they were aiming for a slighter older demographic. I had to escape from the young crowd before I got angry at how many of them wouldn't know what a Global Hypercolour T-Shirt is or weren't alive when Indiana Jones and the Last Crusade was in the cinemas scaring the shit out of me. The ending where the villain ages rapidly still freaks me out to this day. If you don't know what I'm talking about you're either TOO YOUNG yourself or spectacularly pop culture inept. And as you're on the internet I doubt it's the latter.

We retreated to the dining room in the back for some dinner. The food in The Bull was decent. I opted for a Dexter burger which sadly wasn't shaped like Michael C. Halls face. It was tasty though. The beer was fine, although I can't for the life of me remeber what I drank. It was certainly well kept. I don't think I would return to The Bull, but that's mainly because I don't particularly want to return to Westfield, a vast, soulless, confusing monstrosity which managed to combine the worst elements of American "malls."

I've saved the worst for last. The Elgin in Ladbroke Grove is, essentially, a den for tossers. They call themselves a "Food Pub and Music House" which translates to "Stay away from this place." I ventured in anyway. Initial thoughts were the space is quite nice, despite being tarnished by ill judged decor and matey messages written on blackboards. However its true colours showed when I looked at the band lineup. It was all woozy women and gelled up double acts "re-imaging" every genre imaginable. "Re-imaging" usually means playing tired old rock standards on a scratched up acoustic guitar and a triangle, massacring the lyrics in a twee falsetto voice. There's usually a gimmick, such as the band performs standing on top of a tortoise,  which makes them "amazing, daring and unique" according to Time Out and the Culture section of the Times.

I couldn't wait to get out of there. The pint of Sambrooks Wandle was in good nick and very tasty but the pub had no atmosphere. Nobody looked particularly happy to be there and most were either by themselves typing on their MacBooks while taking up a table for four, or sitting around braying at each other while desperately making sure they were looking cool. If you were at the pub the night I visited then I'm sorry but I'm going to have to assume you're a wanker. Don't worry, I was automatically a wanker myself by sitting in the Elgin. I'm sure outside of the pub you're a lovely person and maybe you only ended up in the Elgin by mistake like I did, but if you're a "regular" of the Elgin then please never talk to me in real life. It's probably best for the both of us.