The Wednesday before last I paid a visit to Brighton. Regular readers of my blog (hello mum!) will understand that I may have been feeling a little bit uncomfortable going down there. This is of course because the place is full of hipsters. I imagine that in the Brighton Pavillion there are hundreds and thousands of pods, steadily spewing out trendy bastards complete with hilariously “ironic” dorky glasses and horrific clothes, usually consisting of a bright suit jacket and trousers too short for their useless legs. They will be a sporting a haircut that looks like the hairdresser suffered a seizure halfway through. Finally they will have an ego so large they are blissfully ignorant to just how twattish they are. You can probably tell I'm not keen on them. However apart from those bastards Brighton is quite a nice little town with some good shops. I hadn't been in a while and never really tried the real ale houses down there so I dragged The Lovely Jemma (TLJ) on a mini ale trail punctuated with trips to the shops to keep her happy.

Things got off to a good start at the Basketmakers Arms, a charming little Fullers house in the North Laines. You know a pub is going to be good when you walk in for the first time and feel like you've been going there for years. The ale selection was standard Fullers fare and I had a fine pint of the Bengal Lancer. The star of the show is the food and everybody in the pub was tucking into the grub. This is not a gastro though, it's very much a pub which just happens to serve excellent home cooked food. The menu was very appealing, and I had a delicious and clearly freshly made burger while TLJ went for the chilli which was “very tasty.”

A walk down the Lanes followed where I ended up buying a vintage suit for a murder mystery evening I was attending in Kent. As I handed over the money I was hit by the crushing realisation that I had somehow become a middle class middle aged man by the age of 30. Luckily I didn't start bawling uncontrollable in front of the jolly member of staff and just carried on my way.

The Bath Arms was the next stop, in a prime location in the Lanes. After dragging TLJ from the shiny jewellery shops outside we ventured inside. This was a lovely Shepeard Neame pub with a cosy, welcoming atmosphere. I went for the WJ King Brighton Best, which is brewed specifically for pubs which are part of the Drink in Brighton scheme. This was a pleasant pint, with a good hoppy aroma and taste followed with a good bitter finish coming through. As I'm a geek I checked the Real Ale Guide on my Android phone (yeah I know) and discovered this pub isn't featured, which honestly surprised me. Despite the somewhat high prices this was a great pub. Maybe it will get a mention next year. 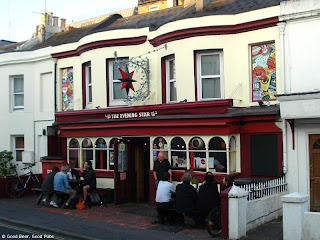 We then moved on to the Evening Star, a Dark Star pub with an excellent reputation with CAMRA members. The pub is basically the ground floor of a house, where the two front rooms have been knocked through. A small bar has been shoehorned into the corner with four hand pumps dedicated to Dark Star brews, and a few extra for guest ales. If I was ever on Grand Designs I would build a house exactly like this one.

Sadly on this occasion the Dark Star selection was unremarkable, with Hophead, Porter and the Americam Pale Ale available. I opted for a pint of the American Pale Ale which was excellent as ever. This ludicrously hopped pale ale is always a pleasure to drink.

We finished our mini trail off at the Lord Nelson. I had read many good things about this pub but when we walked in I wanted to almost immediately walk out and return to the Evening Star. This place appeared dead compared to the Evening Stars bustling, jovial atmosphere. The tempting selection of Harveys ales convinced me to venture in, ever mindful that TLJ may kill me for bringing her to this quiet, whitewashed den of ale. We found a table in a room at the back of the pub, and I scoped out the exits in case a quick getaway was needed. A table across us was engaging in loud banter which thankfully drowned out whatever the hell I was talking about with TLJ.

The Harveys Dark Mild was on good form and was a tasty, textbook version of a Mild with a very pleasant chocolate/coffee taste coming through. I also tried a pint of the Armada Ale which was a delicious, hoppy treat. As the evening went on the atmosphere started to pick up as more regulars came in and the atmosphere picked up. The regulars were all happy to be there which made the pub a much more pleasant place to be. They also were wearing shirts and weren't spectacularly racist unlike the regulars in my local pub in Edgware (which I never visit.)

I was glad to find out that it is possible to have a pleasant evening in Brighton without having to be surrounded by cloying hipsters, fizzy lager and high prices. I popped my head into the Font, a converted church that used to be a Firkin house but is now a identikit “night spot” complete with booths, funky wallpaper and glass everywhere. I looked at the dolled up girls and boys picking at their food and couldn't see a happy face anywhere. I then thought of the Basketmakers where there was plenty of chatter, plenty of characters and good beer. I wondered why would you spend a night out in a bar spending a lot of money in a place that doesn't really care that you're giving them custom, and where you have to try and be the same as every other customer there. Then I realised the ale must have been kicking in for me to think up this cod philosophy. Good night!
Posted by David - A Bitter Bloke at 22:20