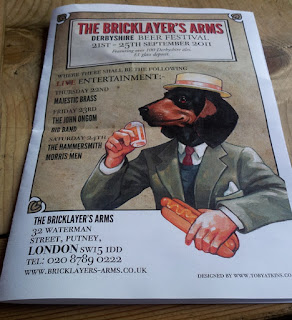 Last Saturday I paid a visit to the Bricklayers Arms in Putney to participate in their Derbyshire Ale Festival. It was my first visit to the Bricklayers after hearing very good things about it. My Putney friends are always raving about it and the pub has won several CAMRA awards. CAMRA usually recommend good pubs but they do sometimes favour establishments where I'm the only customer who doesn't clearly remember the Callaghan government. Luckily the Bricklayers turned out to be a real charmer,with a surprisingly roomy interior and a pleasant, albeit concrete, garden running down the side. The atmosphere was jolly with a friendly crowd in attendance, a nice mixture of young and old folk although marred slightly by some morris dancers (more on them later.) A dog was also spotted. Sadly there was a lack of a busty wench behind the bar but you can't have everything.

Considering the festival started on Thursday there was still a fair bit of choice available. Things got off to a fine start with a very pleasant half of Spire “Brassed Off.” Thankfully it wasn't made from the ashes of Pete Postlethwaite, and instead was a lovely hopped session ale with a light fruity taste. Perfect for the sunny weather that day. This was followed by Amber “EPA,” a low strength (4%) continental style brew that reminded me of the sort of beer you may get in Belgium, without blowing your head off from alcohol strength. A good taste with a rather fine finish. 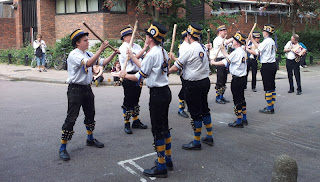 While sipping the EPA I stepped outside to watch the morris dancers perform their strange pagan ritual. To be honest they scare me. The fact that they're quite happy to dress up and dance in their disturbing way is a triumph of brainwashing and I bow down to the alien overlords behind it all. These guys were good at what they do (using ritual dance to communicate the aliens mission status to the home planet) but I was annoyed by a young hipster morris dancer wearing oh so cool dorky glasses and smacking his stick in a ironic way. I was tempted to punch him in the face in a ironic fashion but instead I just sipped my pint of EPA while glaring at him.

Watching them dance in their unnerving way I got to thinking that morris dancers would make a great villain, and that somebody needs to make a film where evil morris dancers hit innocents with their sticks before sucking their souls out, all with the incessant ringing of jangly bells in the background. Actually on second thoughts they best not do that or I'll never sleep again. Eventually I had to stop watching the spectacle before I too was drawn into the hive mind and became a morris dancer myself.

Plenty of further half pints were drunk. Ales that stood out were Muirhouse “Magnum Mild” which wasn't part of the festival but was one of the ales on one of the twelve(!) handpumps This was a great example of a mild with a fine coffee flavour with chocolate undertones. Very suppable. The Thornbridge “Seaforth” stood out for the wrong reasons – sadly this was probably the most disappointing brew I've had from the usually excellent Thornbridge brewery. A 5.9% IPA it had a rather average, even boring flavour and aroma. Thornbridge have been on a good run recently so I felt a bit let down.

Thankfully the Thornbridge “Kipling” came on later in the day and was in fine form. A combination of the previous ales and the excitement of seeing Kipling did unfortunately make me run around the pub like a twat yelling at my mates “The Kipling is on! The Kipling is on! You must drink!” over and over again. Those who did try it agreed that this fantastic hoppy ale with a distinct grapefruit flavour was a fine pint. Although they may have been saying that out of fear of the crazed look in my eyes.

After that my afternoon at the pub came to an end. A fine time all round and I will certainly be returning to the Bricklayers in the future. Hopefully without the morris dancers this time. I can still hear the jingling of bells when I sleep. They're out there. Waiting for me.