After the slightly disappointing visit to the One Pint Pub, it was time to head on to the main event - the Helsinki Beer Festival. It was taking place in a building known as the Old Cable Factory, a massive former, erm, cable factory which has been converted into an exhibition space. But before we got there, there was one more pub on the way that I wanted to try out. Amsterdam is a large, airy modern pub owned by the same company as the excellent Kaisla. Despite the name of the pub it downplayed the Dutch theming, with the odd reference to a bicycle being the only concession to our Dutch cousins. The beer list was sadly nowhere near as exciting as Kaisla's, and again I didn't notice anything on cask. The pub had a mini festival on showcasing IPA's, so I felt it rude not to try one. Notkea IPA from Panimo & Tislaamo Teerenpeli was a rather good example of the style, with a lovely hoppy finish that was very enjoyable.

After this pre-game drink it was onwards with my pals to the festival. Although the festival started at 12pm we got there for 4pm, as the entertainment started at 10:30pm and quite frankly it looked unmissable: 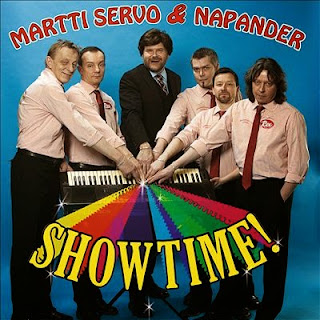 We wanted to be concious for these guys so the later start was a good idea. As with anything beer related in Helsinki the entrance fee wasn't cheap - 17 euro to get in, although we could check in our coats for free because we had pre booked. The cloakroom check scam was one of the more annoying things about Helsinki - just about every bar after 11pm required you to "check in" your jacket into the cloakroom - an easy way to charge an entrance fee without charging an entrance fee as everybody wears a jacket there! After the cloakroom check in we walked into the large main hall - its factory history showing quite clearly with the high ceiling and industrial decor.

Unlike the Great British Beer Festival (GBBF) in London Olympia which lets in lots of natural light to brighten the proceedings, the Cable Factory's large windows had been completely blacked out, leading to a dark and slightly foreboding atmosphere. However unlike the GBBF the crowd in Helsinki where mainly young, so maybe they appreciated the more clubby surroundings. The place was packed with breweries local and international plying their trade. Apart from a "British Ale" bar on the upper level, the majority of the beer was keg. This didn't really matter in the end as the majority of the beers I tried were very tasty.

I sampled many beers throughout the evening. A guide in English listed the award winners and other notable beers. Highlights for me were Thor Bock by Suomenlinnan Panimo, a supremely drinkable Bock style beer with excellent, easy drinking malty flavours. Hillbino's Rye Hiffer IPA by Panimoravintola Bruuveri was an excellent IPA, with big hoppy flavours in the finish - top stuff. Sadly the food offering at the festival wasn't anywhere near as good as the excellent food selection at the GBBF. I spotted around five stalls selling grub, including BBQ, Burgers and German sausages, the last of which I decided to grab some tasty, and inevitably expensive, currywurst. It was washed down with Hainfelder Spezialbier Dunkel by Brauerei Hainfeld, which matched the food very nicely indeed. My favourite beer of the festival ended up being one from the local Helsinki Brewery, their IPA being a top notch example of the style - hoppy, fruity, and not to heavy on the booze.

We managed to stay awake until the entertainment, and Martti Servo and the boys didn't disappoint with a very enthusiastic performance. The Finns absolutely loved them - singing along merrily, dancing wildly and there were even a couple of conga lines. I didn't understand any of the lyrics apart from one song where you were expected to shout "sauna" during the chorus - I was happy to oblige. This was clearly a kitschy act with a bit of cult appeal and it was a lot of fun. Look them up on YouTube for an idea of their act. An excellent end to a well run and very pleasurable beer festival.

In my next update I'll be telling you a bit about the pubs I visited on the Sunday and Monday after - yes somehow despite drinking my weight in booze at the festival I managed to cram some more in at some very good Helsinki boozers. See you soon!
Posted by David - A Bitter Bloke at 20:45