Hastings revisit - The Dolphin and First in Last Out

I went down to Hastings on Good Friday, as I fancied a trip to the seaside and it's pretty easy to get their from my house on the train. Being a holiday weekend I was preparing for the worst on the train journey: screaming kids, stroppy parents and a generally miserable atmosphere. In reality although there were a few young 'uns on the train it was actually pretty quiet. Another surprise for me was how quiet Hastings was considering it was a holiday weekend. To be fair the town isn't looking its best these days, and with Brighton, Eastbourne and other better maintained seaside towns nearby maybe Hastings doesn't have much appeal these days. There isn't really much to attract people down there besides the shopping and the (stony) beach. You also have to leave before sundown to avoid getting attacked by the towns blossoming population of chavs.

I'm hoping the place will start receiving a bit more love from the local council over the next few years as there's still a bit of charm to the place. However none of it is found in the "new town" which is the first thing visitors come across leaving the train station and main car parks. This gormless concrete mass of generic town centre shops isn't going to win anybody over. But walk down towards the old town and things get a whole lot nicer, with little antique and curio shops dotted about that you can easily kill a few hours in. Amongst the antique shops on the outskirts of the Old Town is the First In Last Out, a brewery tap for the FILO brewery, which is a few hundred metres up the road from the pub. I've written about this place before and I enjoyed my time there, and I was looking forward to going back.

The atmosphere was gently buzzing when I walked in with a nice mix of locals and beer seeking tourists. I was pleased to see a small beer festival was on over the Easter weekend. Before I hit the guest ales I tried a FILO ale, the Old Town Tom. Curiously this was the only beer among the FILO range which was labelled as a "craft beer." I have no idea why this one was craft and the others weren't, as the FILO is a small, talented brewery and I wouldn't raise an eyebrow if they labelled all their beers as craft. Curious craft branding aside, the Town Tom was a decent sup, with a ginger kick that added a bit of character to the brew.

I also tried a couple of beers from their festival. Dark Star Seville was on, and what a lovely beer this is. Packed full of orange flavours with every hoppy mouthful, this was a absolute pleasure and I would of happily drank this all day. But instead of getting another I tried a Roosters 41 Degrees North. Despite the tasting notes promising plenty of New Zealand hop flavours, this was a curiously flat tasting ale, with none of the hoppy goodness I've had from other South Pacific beers such as High Wire NZ or Thornbridge Kipling. Disappointing. 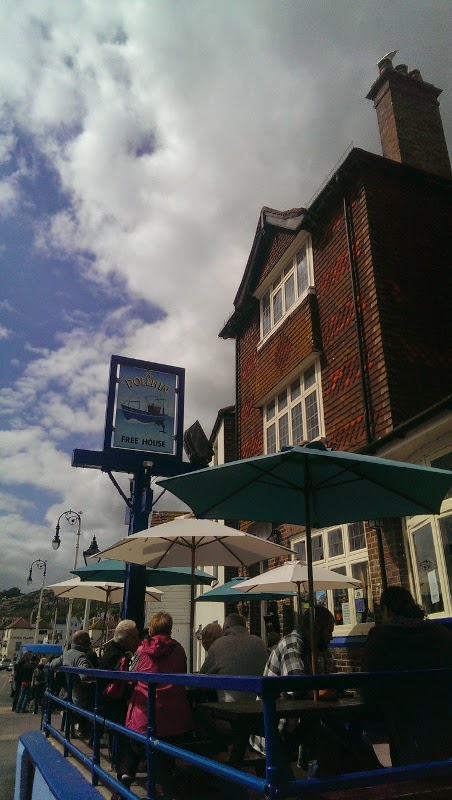 My second pub on the trip was The Dolphin, which I was visiting for the first time. This CAMRA award winning pub was in the more touristy harbour area of the town, and it's situated across the road from old fishing huts. Inside the decor is suitably nautically themed, with fishing nets, captain hats, ropes and other sailing knick knacks scattered around the walls and ceiling. A blackboard proudly displayed the varied ales on offer. There was also a separate blackboard listing "craft ales." Like in the FILO I have no idea how the landlord at The Dolphin decides what classes a beer as craft. The only diference I could see is that all the ales on the craft board were 30p more expensive than the "normal" ales. The breweries on the craft board were Meantime and Charles Wells. Personally I'd class Meantime as craft as they're not really in the "big league" brewers. Charles Wells however is a rather cynical attempt from the Youngs Brewery to cash in on the craft craze, and I don't think it deserved to be on the board.

I opted for a couple of the "non-craft" ales. Franklins Brewery Citra was a good effort at an American flavoured IPA, with a decent mouthful of fruity hops in every sip. Buntingford Brewery Polar Star was another hoppy treat, this time a blonde beer. Both beers were in excellent condition and very flavoursome. Other customers were tucking into tasty looking food, with fish dishes appearing to be the house speciality - unsurprising considering the location right by the fisherman's huts. A good little boozer and one I would be happy to return to.

Next week I'll be (hopefully) writing about the new BrewDog venture "BottleDog," which appears to be a upmarket offie. See you then!
Posted by David - A Bitter Bloke at 19:50