I wasn't too sad to leave Herne Bay and head back to Whitstable to continue my ale jaunt by the sea. Seaside resorts are never much fun in the off season and Herne Bay was no exception, with shuttered arcades, rusting Ice Cream signs swaying in the wind and bored kids skateboarding over a Victorian bandstand. Thankfully the buses in the Herne/Whistable area are pretty frequent - presumably everyone is as desperate to get out of there as I was. 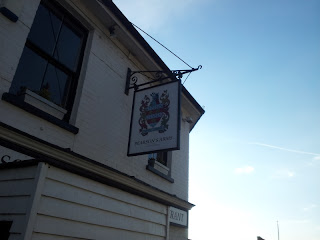 As the bus trundled into Whistable I alighted near the harbour and ventured in, where I treated myself to a bowl of mussels, cockles and whelks. Very tasty, and even though it was now approaching 3pm they tasted fresh and juicy. I headed on down with my seafood bounty to the Pearsons Arms, or as it says on their website, The Pearsons Arms by Richard Philips. Presumably Mr Philips built the pub from scratch himself using his bare hands and determination. Richard Philips is a celebrity chef although I've never heard of him, although to be fair I haven't heard of a lot of people who claim to be celebrities these days. His pub was rather nice - an airy, relaxing space and the classiest pub of the ones I visited on the day, but this class also meant it was the most expensive. There was a solid selection of ales on offer. I went for the Whistable Brewery East India Pale, because being in Whistable I felt I was obliged too. This was oddly disappointing, a rather flaccid, watery brew with underwhelming flavours. Luckily it was only a half as I was getting pretty tipsy by this point of the day. To go with the ale I had a Black Pudding Scotch Egg from the tempting bar snack menu which was absolutely delicious. The Scotch Egg that is, not the menu, I was drunk enough yet to start eating paper and card.

I also opted for a half of the Gadds' Number 7, another pale ale and a much better show than the Whistable Brewery offering. Light and refreshing, with good hoppy flavours, this was a perfectly serviceable brew. The pub was quiet while I was there but the lone barman was happy to serve and very efficient. The restaurant upstairs looked like it served a nice selection of food, which I'll be sure to try if I ever make it back here.

Staggering onwards, I popped into the Ship Centurion, a much more old fashioned, traditional boozer than the Pearsons.  Straight forward wooden tables, chairs and floor was the order of the day here. The place was lively as the after work drinks crew were stopping in for a quick drink. I enjoyed a pint of the Elgood Black Dog Mild, a solid example of a mild with decent chocolate and coffee flavours, which I always find enjoyable. I parked myself into a corner and enjoyed the banter and ambiance. This welcoming pub seemed to be serving its purpose as a community boozer well. Good beer, good chat and a friendly atmosphere - what more could you ask for?

The final stop was the The Peter Cushing, a rather imposing Wetherspoons pub which has been converted from a cinema, and the only pub I visited which wasn't in the Good Beer Guide. But I had a bit of time to kill before catching the train home, and a bit of change in my pocket, so why not pay a visit? This big, vast establishment had the least charm of the pubs I had visited on my ale trail but the beer was on good form. I gave the Whitstable Brewery a second chance and tried the Kentish Reserve, a best bitter which was much better than the pale ale. It wasn't spectacular but it got the job done with a pleasant bitter finish. The interior of the pub was impressive, as you would expect from a converted cinema, with large pictures of Sir Cushing behind the bar. But this was a cold, soulless place with the usual Wetherspoon trappings of crammed together tables and some rather "undesirable" customers - I think one of them may have had a tattoo. With the other pubs on offer in Whitstable there's not much reason to come here unless you're after a cheap pint or Jaegarbomb.

My journey at a end it was back on the train and back down to South London. I enjoyed my day out and I felt all the pubs, except perhaps the Prince of Wales, were worthy of their place in the Good Beer Guide. The Butchers Arms was something special though, and if I was a braver man I would consider opening a micropub myself. But I think instead I will just settle on visiting micropubs instead and writing pithy remarks about them online - it's just as noble!

To make up for the lack of pictures in this blog post here's a sketch of an indecisive pony in a cheese and ham shop mulling over his purchase while a crocodile tries to help, as drawn by The Lovely Jemma. Enjoy! 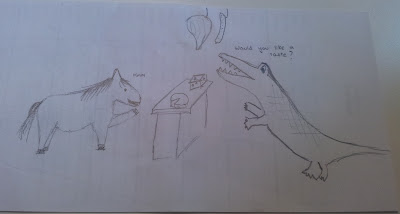