The George, Croydon and Nellie Deans of Soho


If you've been wondering where I've been for the past few weeks, then I truly am touched but there are probably more important things you should be thinking about such as are you sure you turned the iron off this morning, or that the cat was definitely fed? For those still interested I spent a very relaxing two weeks in Ibiza. It was my first time visiting the island, and to be honest I was excepting boozed up Brits parading the streets, slapping their lobster pink bellies while chugging a bottle of Vodka as they march on to the next sweaty nightclub. At Playa Del Bossa I did get that but generally my ignorant expectations were completely wrong and it was a really pleasant place to visit. Ibiza Town in particular was a highlight with the quaint, quiet fortified old town and the vibrant, bustling new town with its expansive harbour. I had a wonderful time and I drank enough Estrella to last me a few years. 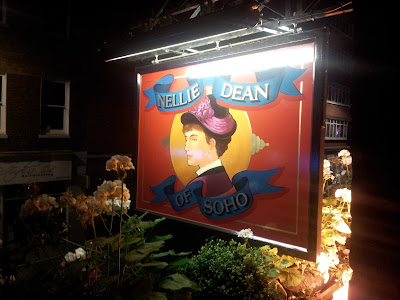 Although I had a great time it was nice to return to Blighty and have a few proper beers. The lager in Ibiza was fine but it all starts tasting the same after a while. A few days after returning to London I visited the Nellie Dean of Soho. This was actually the first time I'd popped inside this pub despite walking past countless times. It has always looked so busy from the outside that I've always just walked on and end up at The Ship.

Soho is a strange place for pubs because all the good ones are really small and all the terrible ones are large barns. Nellie Dean is a small pub which is a good sign but it also means it's difficult to get a seat, particularly in the cosy downstairs main bar. There is an area upstairs with a pool table and a jukebox, and some additional seating. There's also, unfortunately, some "art" from aspiring artists. When we visited the art appeared to be the product of a mad man but the price tags clearly confirmed my suspicions that the artist was due a trip to the funny farm - £500 for a warped drawing of a depressed naked lady with all the subtlety of a punch in the chops.

The afore mentioned jukebox had a music selection which was satisfyingly naff as any good pub jukebox should have, with no music past around 2005. Much to my disappointment the jukebox only played music upstairs so I couldn't annoy the patrons downstairs with my fine selection of ZZ top "Legs" and Phil Collins "Easy Lover."  Me and the Lovely Jemma were the only ones upstairs for a long while (maybe everybody knows about the art,) but when some people did come upstairs they left halfway through my selection of "Welcome to the Jungle." Perhaps they were disappointed that there wasn't snakes and crocodiles supping a pint surrounded by several species of endangered trees in a humid environment and that Axl Rose had lied to them. Or they just didn't have decent taste in music.

The whole pub has a easy going  vibe which is different for Soho were most of the pubs are filled with jumped up trunts. As for the ale, I enjoyed a fine pint in there but I can't for the life of me remember what it was I was drinking. I really, really must start taking notes at these things. At least I remembered to take one photo of the place. I'm going to chalk it up to being out of practice after returning from the holiday.

I've walked past The George in Croydon many a time but have never ventured in, mainly due to the Wetherspoon "clientèle" who are huddled outside smoking a fag in the harsh Croydon light. However I'd recently discovered that it had won pub of the year 2011 so I ventured in for a pint. This is a large pub with two bars. I was pleasantly surprised to find that the bar in the back had a decent collection of Dark Star ales on, and I enjoyed a fine pint of Meltdown to go with my Wetherspoons curry. The spiciness of the ale complemented my reheated Chicken Bhuna nicely. The front bar had a great selection of local and more well known ales, with plenty from the Surrey area.

I enjoyed a couple of pints here and all the ale was in tip top condition. They clearly care about beer and selection wise this was probably the best Wetherspoons I've visited. The only problem with this pub is that it seemed to attract even more stereotypical Wetherspoons characters than usual. There was a mix of families, young couples and workers to soften the atmosphere a little but there were a fair few folk who you probably wouldn't want to bump in to in a dark alley, or even a floodlight one in the middle of the afternoon. But I guess that's the chance you have to take when you go to a pub in Croydon. At least I didn't have to suffer any terrible art.
Posted by David - A Bitter Bloke at 23:22