The Parcel Yard is a new Fullers venture which has opened in the brand new annex to Kings Cross station. Part of the rengeration of Kings Cross (which has been ongoing for over forty years now) the new annex looks like a UFO that has crashed into the side of the unassuming main building. Inside it looks like a giant metallic tree has burst through the ground and enveloped the concourse. It reminded me of the British Museum but instead of being filled with mummies and rare artifacts it's got drunk geordies and a Smiths. Sadly the shops and eateries inside aren't nearly as exciting as the architecture. Apart from the excellent Benioto's Hat which serves great burritos it's the usual (boring) suspects. If there's one thing Kings Cross needed is another bloody Pret A Manger. Thankfully this branch doesn't play the irritatingly twee "jazz" that some Prets play while you're trying to shove a £4.50 baguette down your gullet.

Distressingly Pret have started putting the calorie count of their food displayed on the label, a trend other fast food places have been following. This makes getting lunch a bizzare numbers game, where you desperately try and stay under the fabled score of 2500 calories, or 2000 if you're blessed with breasts. I now have to carefully calculate the calorie score in my head, just in case I do go over the magic score and turn into an obese, wheezing ball of fat which the Government is convinced we're all going to become if we don't follow their strict lifestyle advice. While the MP's continue to enjoy cheap booze in the House of Commons pub and take countess lunches with clients and "dignitaries."


But I digress. At the back of the new annex is the Parcel Yard. From the outside it looks nothing special, with a staircase leading up to the main pub. Inside is a different story. This place is gigantic, sprawled over two floors with new nooks and crannies to discover at every corner. In the middle is an appealing atrium style space, covered by a high and lovely glass ceiling. Exposed ducts and wiring mix well with the classic Victorian architecture. This is a good looking pub and even though it is gigantic it was packed to the rafters. How long the place stays packed after the initial excitement dies down remains to be seen.

Despite the pleasent decor the ale selection was nothing special with the standard Fullers selection available and space for a couple of guests. Sadly a lot of the ales were off when I visited on its third day of operation and only Chiswick, HSB and London Pride were on offer. Chiswick is essentially brown water and London Pride is pretty dull so I opted for a couple of pints of the HSB. It was in good condition, the pleasant dark bitter taste coming through. Service was fine but the prices are expensive, around £3.80 for a pint of HSB which is very steep. This was the day after the budget so maybe that crafty Mr Osbourne had already worked his wallet emptying magic. The pub had also committed the cardinal sin of running out of crisps. All flavours, even the hated prawn cocktail! I had never seen this in a pub before. In fact I thought a pub without crisps would be like the Tower of London without ravens - it would just crumble to the ground. 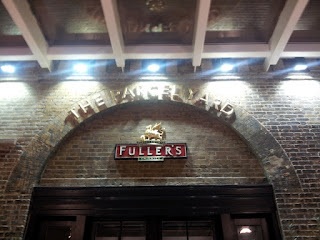 The many seating areas all had their charms and we sat in a area that was clearly former offices. It was a comfortable and pleasent environment, and it was easy to forget you were sitting in a train station pub as long as you don't look out the windows overlooking the trains and platforms and other objects that would remind you that you're in a train station pub.

I had an enjoyable visit but the high prices won't entice me to return often, especially with the Euston Tap and Doric Arch offering a better selection with lower prices just down the road. With a captive audience of thirsty commuters and Geordies filing through Kings Cross everyday this is never going to try and attract a loyal crowd but the bonkers prices makes me wish, dare I say it, that Wetherspoons had a stab at the place instead.
Posted by David - A Bitter Bloke at 20:23