For my sins I live in a town called Edgware in North London. Edgware is pretty much like every other faceless commuter town on the outskirts of Zone 5. Its only notable feature is that it's the last stop on the Northern underground line. This means every time I take the tube home I get to hear the automated voice say “This train terminates at Edgware” which makes me think Edgware is so depressing even the trains want to end it all once they get there. To be fair the high street isn't too bad with a fair mix of chains and independent restaurants and shops. Sadly a Cash Converters has recently opened in place of a Pizza Hut, perhaps reflecting the downturn in Edgwares fortunes in the past few years from “slightly shit” to “quite shit.” Still economy wise Edgware is probably doing better than Italy.

One thing Edgware is severely lacking is a decent boozer. The only pub on the high street, The Edge of Town has an admirable score of 1.6/10 on beerintheevening. Needless to say I've never been in there. It looks like the sort of place which would be filled with racists, sexists and xenophobes. Every time I've got a glimpse inside my assumptions appear to be correct, at least about the racists and sexists. I'll admit I'm not sure what “xenophobe” means. I just wanted to sound clever by using some stupid foreign word that I don't really like. There is another pub on the high street, The Railway, which unfortunately has been closed for years.

It's sad that in my formative years there wasn't a nice friendly pub to waste my youth in. I'd sometimes meet my mates at the Harvester for a pint which is not only desperate but terribly middle class. I'd sit there enjoying my pint of fizzy Fosters (I was young OK) while next to me sat young parents who had realised they had ruined the rest of their lives as they fed spitroast chicken to their screaming, puking loinspawn. Speaking of vomit I once puked so hard in the Harvesters toilets that vom shot out my nose, ears and possibly my eyeballs. As I surveyed the horrific state of the cubicle I had to admire that the body could hold so much rancid fluid, before desperately starting to panic about how I could clear this disgusting mess up. In the end I did the right thing: I cleaned up my trousers to look vaguely presentable before darting out of the place.

The rest of the crowd was usually the type of people who would consider a visit to the Harvester “a treat.” You can see the glee in their eyes and the stomach sticking out their T-Shirt as the bored 17 year old server asks “Have you been to a Harvester before?” The correct answer to this by the way is to shout out “SALAD BAR!” before grabbing a bowl and loading it full of saggy tomatoes and crinkly lettuce, and piling on the tasty but probably artery destroying salad dressings. 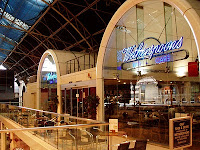 But I digress. This is a beer blog so I should probably mention something about ale. Last Saturday I ended up in the Wetherspoons in Victoria Station while I was waiting for The Lovely Jemma to be delivered. For a station pub it's not too shabby. The inside may have all the atmosphere of a tramps fart and the clientèle look like they've probably seen better days, possibly back when you could buy a pint of Watney's Special Mild for 2d. However the ale on offer is usually quite good, and sometimes very good. I enjoyed a lovely pint of Skinners “Betty Stoggs,” a warm, charming Cornish ale. This has won awards from CAMRA and rightly so, with a delicious malty taste and a fine finish. A pleasure to drink, and the pub isn't a bad place for a tipple if you find yourself stuck waiting for a train.
Posted by David - A Bitter Bloke at 22:24