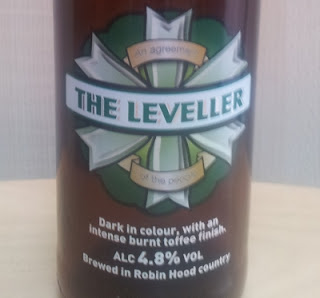 Before turning 30 on the 25th July I had to get to grips with a couple of hard truths. Firstly that I wouldn't be able to stay up as late as I used to without taking a nap beforehand (around 4pm is good.) And secondly I would no longer be able to abuse my body with huge amounts of sugary snacks and fine ales without showing the consequences in the form of a prominent beer belly. To prepare for this the Saturday before my birthday there was a party involving a tremendous amount of cake, beer, donuts and gin. It was such a great time Amy Winehouse died during the middle of it. It was well worth the extra strain put on to my already burgeoning stomach.

Two of the gifts I got at the party were CAMRA membership and a ton of beers from Morrisons. This got me thinking. I like ale, and I also like posting inane nonsense on to the internet. So why not combine both? And thus this blog was born. 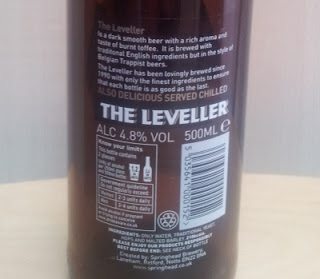 The first beer I'm writing about is The Leveller from the Springhead Brewery in Nottinghamshire. As you can see the bottle promises a burnt toffee finish. Foolishly I forgot to take a photo of the actual liquid itself- I'm still learning about this blog business and being thirty (and thirsty) I get easily confused and forgetful. The ale was an attractive dark colour and true to its word the burnt toffee taste was there and very pleasant it was too. The label promises a taste reminiscent of a Belgium trappist beer and it wasn't far off the mark. It's not quite a Chimay but this was a damn fine drink and well worth picking it up if you spot it in your local Morrisons.

Morrisons themselves are weird places – in the North they appear to be fairly respected and a decent place to shop. In the South they feel like a outcast. They're not as scummy as Asda but just not in the same league as Tesco and Sainsburys. Its ale selection is probably the best of the major supermarkets though and they are a huge step up from the misery of Safeway (or Shitway as nobody used to call it.)

Morrisons also used to suffer from those terrible adverts with a Z-List celebrity wheeling a trolley around. Sadly they never showed the celebrity taking out his shopping and then dumping the trolley into the nearest stream. The adverts they have now aren't much better – precious little kiddies asking inane questions like “What's a fish?!” or “What does steak mean?!” Again a little bit of realism in these adverts would help. They need to show the kids asking some hapless fishmonger “Why are you so ugly?” or “Why is your mum so fat?”

In fact I'm not even sure the adverts I just described are even for Morrisons, they could be for Asda. Adverts for supermarkets are so interchangeable – there's only so many ways you can show people buying food and drink. The only distinguishing feature is the type of customer featured in the advert. Tesco: average boring folk, Waitrose: well off white people, Asda: scumbags.

I'll continue to update this blog with details of any ales I come across that warrant a mention. I'm not very good at taking photos so you may need to use your imagination a bit. And even if nobody ends up reading this thing I still get a delicious ale out of it so it's not a total loss I guess!
Posted by David - A Bitter Bloke at 19:56